The History of the Shire Horse

The Shire Horse has played a huge role in the world, first in England and then world-wide. Originally it was used as a war horse carrying knights in armour, and then it was the main source of power in industry and agriculture for 250 years. Again it became a war horse in the 1st & 2nd world wars pulling the heavy artillery in appalling conditions. The Shire Horse nearly became extinct after the 2nd World War and it was only the dedication of a small number of breeders l that has prevented it from disappearing from our countryside for ever. Today, however, Shire Horses are increasing in numbers all over the world as more and more people fall in love with this awesome horse.

The origin of the Shire Horse dates back to a cold blooded heavy horse, first mentioned in around 1066 brought into England after the Norman Conquest. From this developed the “English Great Horse” of the Middle Ages often spoken of by Medieval writers.

In Medieval times it was essential to increase the size and number of horses called “The Great Horse” in order to carry knights in full armour.

During the reign of Henry VIII, from 1509 to 1547, special attention was directed to the raising and breeding of strong horses, and several laws were passed with that in mind. Acts were passed in 1535 and 1541 forbidding the use for breeding of horses under 15 hands in height, also prohibiting all exportation, even into Scotland.
It is from this heritage as a War Horse that the Shire Horse of today was originally bred. 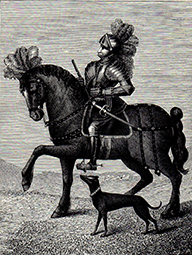 Above: Lord Hungerford Knight of Farley, about 1660, on his Great Horse.

From the end of the 16th Century heavy horses were required to haul heavy wagons & coaches across the countryside at a time when roads were no more than deep rutted muddy tracks. At this time large numbers of Flanders & Friesian horses, predominantly black, with feathered legs, were imported from Holland. They had a great influence in the development of the Shire introducing a refining element and a better, freer movement.

These Dutch horses were used in the first half of the 17th century when work began on draining the Fens in the east of England in Lincolnshire & Cambridgeshire. A  massive wide footed horse was needed to provide the strength and weight needed for the heavy work.

When the work was finished, these horses remained in the area and were used for breeding. They were then sold into Leicestershire, Staffordshire & Derbyshire and so from the Shires of England developed the Shire Horse.

Both in commerce and agriculture Shire horses literally made the wheels of Britain’s industry go round. They worked in fields, in towns, on docks and quays, on canal towpaths, for mills and railways. There were millions of them. There was a huge demand, for many, many years, for massive horses with great muscular strength and an even temperament and the breeders applied their skills in developing these important traits.

The foundation Stallion of the Shire Breed is recognised as being the Packington Blind Horse who stood at Packington near Ashby de la Zouch between 1755 and 1770. He was black and appears in the first Shire Stud Book because of the large number of horses descended from him.  By 1800, the Shire draught breed was well established, from the constant breeding for a type, fit for its purpose, even though there was no stud book at that time.

The English Cart Horse Society was founded in 1876 and published the first stud book 2 years later. The Shire Stud Book has always been ‘open’, allowing the grading in of offspring from the right type of horses. This has led to constant new genetics, plus hybrid vigour. The Society also immediately commenced an annual London Stallion Show; which was massive and soon included mares and geldings as well.

In 1884 the Society changed its name to the Shire Horse Society. At this time the Shire horse was still very much a work horse but was being shown extensively, and that fierce competition, combined with a stud book where breeders could find listed, successful show horses and their relatives, resulted in further improvement of the breed. 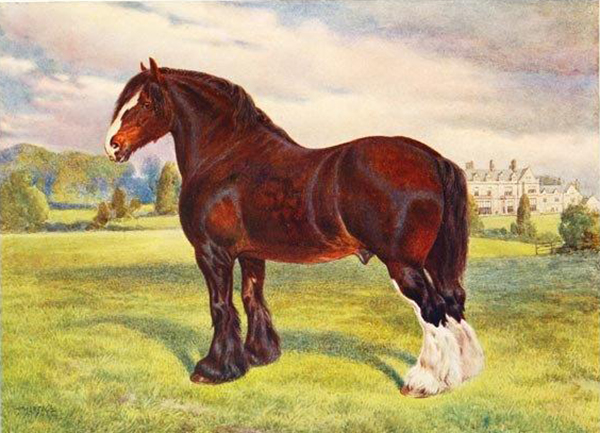 The Shire had a huge following, including King George V. His stallion Field Marshall V won the London Show twice before going on to be one of the most influential sires of his time.

The Shire again played an important part in the 1st & 2nd World Wars pulling the heavy artillery After the 2nd world War with the improvement in mechanism the Shire was no longer needed in either industry or agriculture and in the 1950’s was nearly doomed to extinction.

Numbers of horses (including Shires) used for agriculture including mares for breeding fell dramatically from 550,000 in 1939 to only 5000 on 1972. The subsequent revival of the Shire owes much to a few determined breeders & exhibitors and Breweries using them for short haul work and promotions.

The Shire Horse in Australia

Shire Horses were imported into Australia during the 1800’s and early 1900’s, but not enough to form a viable herd.  Many were stallions who were put over local mares. The early Shire, being so big and heavy, struggled in Australia with the long distances and harsh environment. So by the mid-1920’s, registered Shires had virtually died out.

In 1981, Helene and Gregory Scarf imported the first registered Shire stallion, Ladbrook Edward, to come into Australia for about 60 years.  They soon followed Edward with importing a small herd of mares.  Others soon followed and the Shire numbers in Australia have slowly built up ever since.  However the Shire Horse is still a very rare horse in Australia, as in the world generally.

The Shire Horse has always evolved. The modern Shire is big and powerful, but graceful and athletic, with white markings and beautiful flowing, silky hair (feathers) on its lower legs. Today, the Shire is a very versatile horse and it is used for driving in carts, all types of riding, pulling agricultural implements like sleds and ploughs, weddings and promotions.  They are also a spectacular show horse. Many people just keep a Shire as a loyal friend and a beautiful horse to own.

The Shire is a horse of great size: a mature stallion should stand over 18 hands and weigh up to 1,000 kilos. Mares and geldings are slightly less massive. It has relatively large, wide-set and expressive eyes, the nose is rather convex (“Roman”). The shoulders are large and deep and the body has substantial barrel. The legs are long with considerable feather about the feet. It is usually found in bay, brown, black and grey.

Registered shire horses are not branded. They are instead sketched and microchipped for identification purposes and breeding horses are parentage verified using DNA testing.