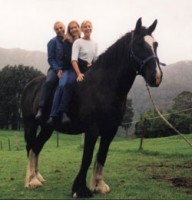 The Cedars Shire Horse story needs little introduction to those in the know. When Ladbrook Edward arrived at a property at Kangaroo Valley in the Southern Highlands of New South Wales in 1981 it was a new beginning for Shires in Australia. Helene Scarf laughingly recalls that she became intent on finding a draught horse to be her friend and worker on the farm. A friend told her of the Shire Horses in England and so Helene found the horse of her dreams – the largest equine in the world! The English Shire had almost died out in Australia after World War I and almost as soon as an introduction was made by Helene to one of England’s foremost breeders the wheels were set in motion for the breed’s return to Australia. Ladbrook Edward was born on Arthur Lewis’ farm in Tanworth in Arden, Solihull, West Midlands, Warwickshire,, known as Little Ladbrook Farm, on 25th May 1980. Unknowingly, that horse was destined to revitalise the breed twelve thousand miles away. Coincidentally, in this same year, his grandfather, Ladbrook Invader was to be immortalised in the Guinness Book of Records as the tallest horse in Great Britain at 19.2hh.

In 1981 at just 9 months old Ladbrook Edward, known to his friends as ‘Jock’, migrated in a converted jumbo to The Cedars in the Kangaroo Valley, carrying with him age old bloodlines that made him an extremely worthwhile candidate for jumpstarting the breed here. His dam Ladbrook Poppett and his sire Ladbrook Aristocrat (later sold to the States), were both U.K champions. Jock too claimed many a blue ribbon in Australia as the breed expanded. Jock grew to 19hh, and was a noble ambassador, displaying his gentle giant qualities at celebrity events and agricultural shows up and down the east coast of Australia.

In 1984 three fillies, Gronant Joy, Snelson Louise and Cumeragh House Kate also made the long flight to join Jock and form the nucleus of the Shire Horse breed in Australia. Later the same year saw the arrival of Peplow Lady Christina and Peplow Princess who were both immediately joined to Jock, and Princess gave birth to the first of Jock’s sons, Cedars Archibold. Jock went on to sire over 50 foals, 21 of which are in the UK Shire Stud book and his bloodlines reverberate throughout Australia’s Shires today. Jock died at the grand age of 21 and a stone memorial with bronze plaque stands on his favourite hill commanding a magnificent view of the Cedars, his beloved home for twenty years.

Cedars Archibold, born on 24th January 1987, has become quite a celebrity himself. Also reaching the grand height of 19hands, he was the first born purebred Australian Shire to be listed in the U.K Shire Horse registry. Archie’s career has been colourful – he has spent time in the Police Force, both as a Drum Horse, and on patrol, appeared many times on T.V , led parades through local towns, made some charity appearances and enchanted everyone with his docile nature. In 2003 Archie was a star attraction at Sydney’s Royal Easter Show as the tallest horse in Australia, However his nephew Luscombe Nodram has outgrown him reaching 20.1hands to become the tallest horse in the world.

Cedars Majestic has succeeded Jock as the resident stallion at The Cedars. He has won many blue ribbons at the Sydney Royal and is putting quality purebred stock on the ground. He has sired nine progeny so far comprising of six fillies and 3 colts. One colt has been gelded. Majestic will continue producing quality purebred stock at The Cedars. He was the first Australian Shire to have given semen to be used chilled. 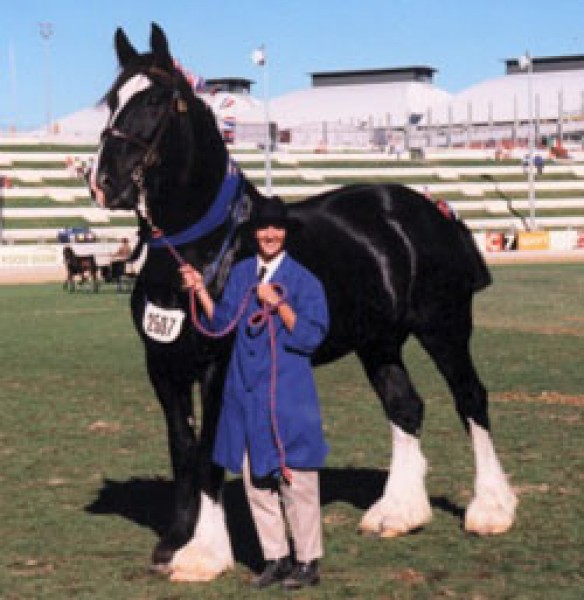 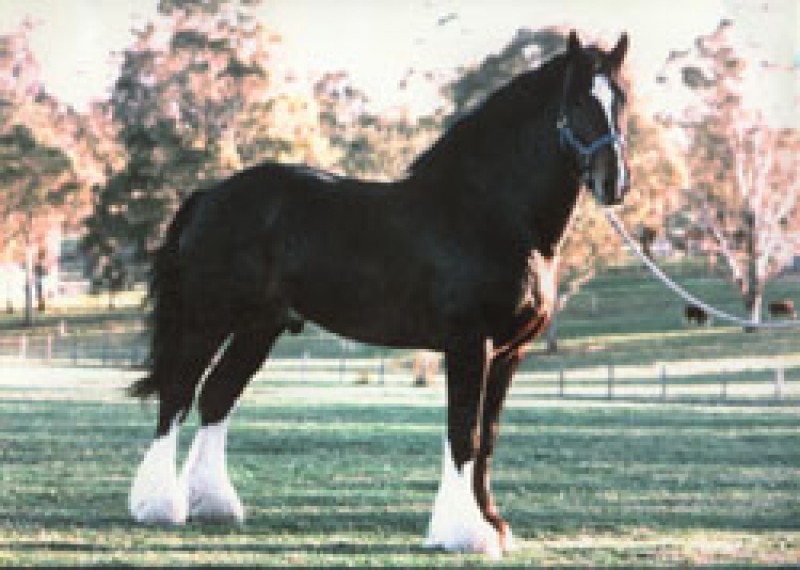